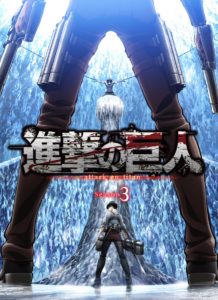 After nearly a year, season 3 is set to be released. Fans around the world are already buzzing with excitement and speculation. According to the interviews on the 2nd season boxed set, the upcoming episodes will be more bloody and violent. Corresponding to the manga’s Uprising story line, the conflict will center around the titanshifters, pitting human against human.

The 3rd season will also address some of the surprises left over from season 2, including the identity of the remaining titanshifters and possibly the eventual fate of the titans themselves. How so many unanswered questions came from such a short season 2 is beyond me, but season 3 is rumored to be a full 24 episodes.