Cowboy Bebop – is it really 20 this month? 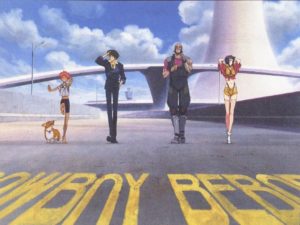 The iconic series (and later released as a movie in theaters worldwide) Cowboy Bebop turns 20 this month and it doesn’t seem like its been that long. Spike has been one of my heroes for a long time. His cool demeanor, and the casual, yet determined way he tackles obstacles gave me something to strive for.

If you have not seen this series or the movie I highly recommend it. It will draw you in; within the adventures of the crew you will find parallels to things you’ve experienced.

The year is 2071 and humans have spread throughout the solar system. The police are spread so thin that they can no longer catch criminals. A bounty hunting system is implemented to capture and bring them to justice. For a reward of course.

Spike and his crew, an ex-cop, a con artist with memory issues, an adorable yet eccentric hacker and a genetically engineered and intelligent corgi, aboard the ship Bebop, work together hunting down fugitives to fulfill their contracts. Throughout the series they have several misadventures frequently leaving them broke and eating instant Ramen.

The series touches deeply on the ideas of loneliness and love and how when tragedy strikes those two feelings can lead to revenge.

Cowboy Bebop originally aired in Japan from 1998-1999. Dubbed into English, it was licensed by Bandai Entertainment and released into the United States in 2001 on Adult Swim. Cowboy Bebop is currently licensed by Funimation.